skip to main | skip to sidebar

You can find me here:


So make sure you update your links!! Unless of course you don't want to. In which case I'll understand.... 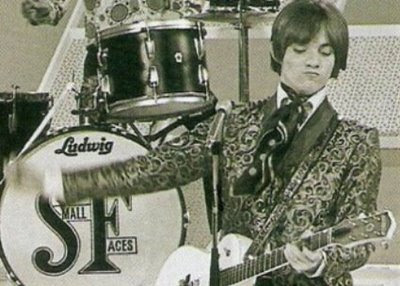 Some blog tennis with those lovely people Ally and Davy.

I love those Small Faces guys. Steve Marriot is one of my favourite singers ever, and I just love the sound, that crunchy guitar, the solid but swinging rhythm section, and the Hammond organ. And most of all some of my favourite songs from the 60s. All that fuss over the Beatles or The Stones. I love them, but for me Townshend, Davies and Marriot/Lane are the Top Trumps. I wish somebody would work some of that remaster magic on the Small Faces catalogue.

A couple of useless facts. Steve Marriot was born five years later but shared the same birthday as my dear old mum. Who lived next door to the Small Faces in Pimlico. Where I was conceived.
Probably a little too much information eh?

Get Yourself Together
Tin Soldier

Well August came and went. And with it came a fairly big house move; one that took me somewhere else. I've been offline for nearly three weeks as well, thanks to the joys of getting anything done without a computer.

The move has left me with a journey that is, shall we say, longer than it was previously. Long enough to catch up on books I've had sitting there and to listen to albums in their entirety instead of twenty minute snatches here and there. I'm still trying to work out where I am in the world, and not quite feeling at home yet. But it's good. I've watched the sun rise over fields this week, which is a damn sight better than the early morning faces on the tube I have to say.

However, I've still not unpacked my precious back up drive which has my music on it so there's no tuneage for you today. Just a little hello as we get some unexpected September sunshine.

For those of you who don't read the comments.... well sometimes you really should, you're missing the best bits......

"Ah Primary School. It was the late 60s for me, but the sentiments remain the same ....

I remember the obligatory boy with the white patch of sticking plaster over one eye. His hideous black-framed NHS spectacles sat upon his wart-infected ears. My new shoes were rubbing already.

The older kids in the corner mischievously sang that summer's bizarre novelty hit, "There Coming To Take Me Away Ha-Haa!" Mum had cut my hair around a basin and I had a lop-sided fringe. I smelled of camomile lotion following the recent spotty Chicken Pox affair. 2lemon bon-bons gathered lint in my pocket.

The teachers looked about 55; looking back, they were probably 26! 'Maybe they'll teach me how to become a real Thunderbird?' I wondered. (I had imagination - what more would I need in life?)

And the girls. Lots of girls. Mostly pig-tailed, missing their front teeth and ugly as sin; but one or 2 were worryingly pretty. Handstands against the wall with knickers on display. It was all too much! I'd never considered that girls existed before. I had football, a dog and a tortoise - girls had never been necessary.

The bell clanged. This was it.

"You're a big boy now. These are the best days of your life". (Had I known about God then, I'd have asked him to help me). I so desparately wanted to cry when my mother said goodbye. That wretched stomach through a mangle feeling.
She spat on a handkerchief and wiped my grubby face one last time and she was gone.

I noticed a pile of freshly steaming sick was being covered by a man with a shovel and a bucket of sawdust. Some boys were still sobbing into their mothers' aprons. My bottom lip wobbled precariously - but I must've somehow realised that future playground pecking order and classroom kudos could not be gained by wailing like a 'puff'.

Besides, I'd previously learnt how to be 'mummy's brave soldier' when TV's Andy Pandy show ended, and the heart-wrenching signature tune had played .. "Time to go home, time to go home .. Andy is waving goodbye ... Goodbye".

On that very first morning at school, I remember learning 2 important things:

Lesson 1 - If you're happy and you know it, clap your hands.

Lesson 2: Don't sit next to the boy who's shit himself.


As I've said before kiddo, you're not alone.

London Bridge Is Falling Down

I've been looking around myself this past year. So many things have changed as I turned 40, before and after. I'm not looking at the same landscape I was last summer. New arrivals, big changes at work, at home. Friends have left town or are leaving. Other friends are leaving each other.

This week my old primary school burnt down. A huge chunk of my life gone. Probably the last marker of my childhood gone. My old part of town has been knocked down and built up so many times. You don't expect bricks and mortar and concrete and glass to be so transient.

Anyway I'm sitting here, watching Field Of Dreams, a beautiful film about the past and putting things right, coming to terms with who we are and what we have done. And I'm reminiscing and getting a little blurry.

Lets see, what was there going on back then? What do I think of when I was at Primary School? The summer of 76, too hot to sit out in the playground, everyone sticking to the shade, water from the taps being too hot to drink.

J, (like a Lloyd Cole song most of the important women through the ages have been inital J...)who was in the same class as me throughout. Looking back over old photos she was a pretty little thing but she grew up to look like her mother. Who looked like a potato.

Monkey, with one of the best theme tunes ever, the talk of the playground the monday after.

Another D, the school nutter, from a family of nutters. Who for some reason always liked me so I never felt the terror of his presence like some people did. He looked like Paul Weller, which put me off The Jam for a long while. He ended up in prison and came out a preacher.

O, who had a huge crush on me and whose brother was in one of the Guy Ritchie movies years later.

And Star Wars. Batman (parka hood up, buttoned at the neck). Spiderman. Never being chosen for football. Playing kiss chase one last time on the last day of school. Getting a slap around the face from J because I finally kissed her.

And then there's my mum, bringing my sister and me up single handed, with all the things that brought, including my inclusion into the free school meals gang. Getting called a tramp was a quick way for the person doing the name calling to get a punch in the face...

London Bridge is falling down but they'll keep building a new one in it's place.

Out of all the big events of the 20th Century, the one my mum talked about most was the moon landing. Apparently on that night she held me up to the sky to look at the moon and told me all about the astronauts being up there. I was five months old. And I can just imagine what she'd be telling us about if she was still here!

I'm about to step outside and see what I can see now forty years later and then I'm going to tell Alfie all about it!

I had a message asking if I was still alive this week. Well, I am!

It wasn't swine flu in the end, but it was a particularly nasty infection with some symptoms that were very flu-like. A couple of weeks later and a course of antibiotics and I'm up and running again.

Now, I hear you ask, where is the blogging? Where is the music? Well, not really been up to doing much of that lately; in fact I'm not sure what I've even been listening to. It is a blip at the moment though, there's a lot of things going on obviously at home and at work so... and besides which, all my music is on a separate drive and I'm sitting in another room on a laptop. Really can't be bothered to unplug things and replug them. Sigh.

I'm hoping things will settle down somewhat in a few weeks. I may be hoping in vain mind you!

In other news I've just discovered one of you lot (Mr Planet Mondo himself) is working about thirty yards down the street from where I work. I'm not quite sure whether to buy him a pint or stalk him. :)

Anyway, here's a tune I did have to hand, and it's a cracker. One of my most favourite remixes ever, and the moment when suddenly the world joined the dots between eras for me. A real lightbulb moment!

View my complete profile
Files are available for a short time only. Try and go buy!

Any issues with anything on these pages contact me at tivoli1969@aol.com.